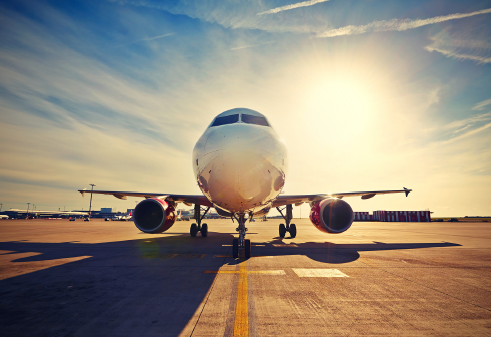 Aircraft operate on a 400 Hz Electrical Supply for many technical reasons. 400Hz majorly helps have lighter transformer cores on the aircraft thus reducing the aircraft weight and additionally lowers the energy stored in the transformer core which are among other reasons for the using higher frequency. Traditionally, aircraft ran their APU or Auxiliary Power Units while on the ground. Running APU is very expensive and at the same time pollutes the air at the airport already overwhelmed with the jet engine exhaust. Aircraft while at the gate is now connected to a ground based 400 Hz power supply. This saves 90% of the cost of fuel otherwise incurred on running the APU. Of course, the airport provided power is cleaner in many ways and more reliable as well. There is also a need to accurately measure the amount of energy consumed by the aircraft while at the gates so the respective airlines can pay their fair share to the airport authority. We proposes the following solution to address this.

Install smart 400 Hz Multifunction Power and Energy Meters at each gate where an aircraft is connected to the 400 Hz ground power. Now connect those meters to a central data collection and monitoring system. This will allow airport authority to accurately bill each airline on a periodic basis.

“The airport authority gains complete control over billing of each airline on a periodic basis.”

The following equipment is proposed together with the schematic.

“Along with the monetary savings, pollution control is an added benefit“